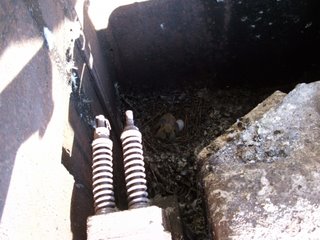 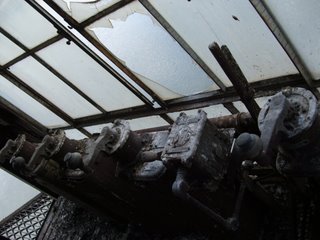 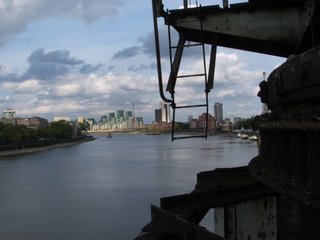 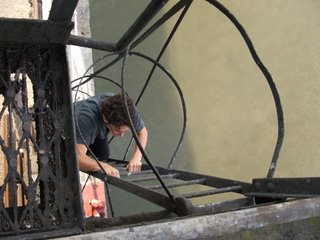 we found a birds nest, and plenty of bird sit to go with it. those are the old scholl levers and knobs to contol the crane 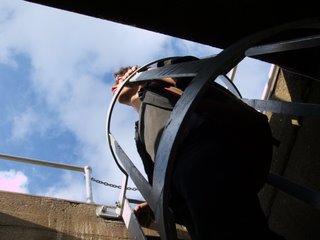 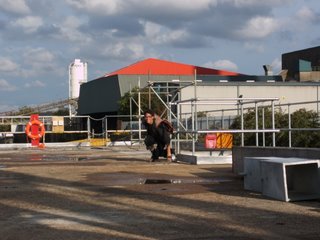 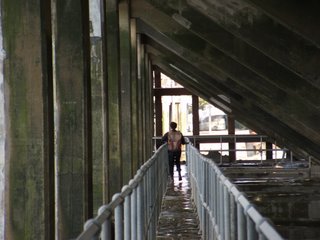 this walkway is usually submerged. bassie checking to see if the coast is clear and then legging it across the platform 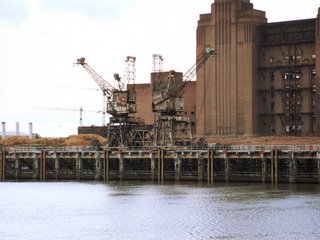 we wanted to get onto the crane on the left. which is on top of this huge platform that just sits in the river. so we just got into the river bed further down and walked down to the platform. cus it was low tide we could walk out to it and climb up through it onto the platform itself. that was the risky bit because it was completely flat and visible to security. so there was a quick run across to the shelter of the crane and then we managed to get up as far as the big box bit in the middle, where the driver sits an the all the main cogs are. they had welded mesh grids around the base of the ladders to stop people climbing up so we went up the underside of the ladders which is fine but if you slip you fall about 8metres into the river. I was so scared but it was such a good buzz! Below is the place upstream where we got in. the cranes are just visible above the railway bridge in the foreground. It was amazing how industrial the whole place even though it was in the centre of London 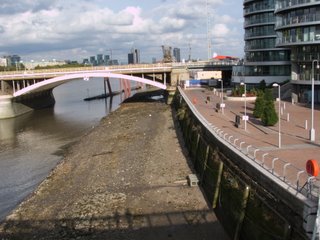 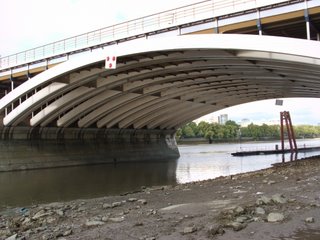 Sorry, we didnt know it was private property… 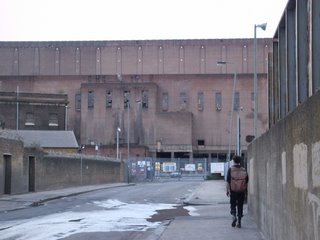 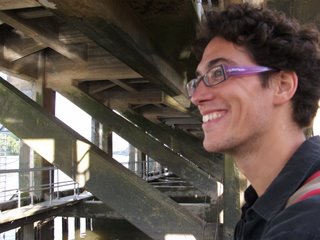 Why doesn’t America believe in evolution?

Human beings, as we know them, developed from earlier species of animals: true or false? This simple question is splitting America apart, with a growing proportion thinking that we did not descend from an ancestral ape. A survey of 32 European countries, the US and Japan has revealed that only Turkey is less willing than the US to accept evolution as fact.

Religious fundamentalism, bitter partisan politics and poor science education have all contributed to this denial of evolution in the US, says Jon Miller of Michigan State University in East Lansing, who conducted the survey with his colleagues. “The US is the only country in which [the teaching of evolution] has been politicised,” he says. “Republicans have clearly adopted this as one of their wedge issues. In most of the world, this is a non-issue.”

Miller’s report makes for grim reading for adherents of evolutionary theory. Even though the average American has more years of education than when Miller began his surveys 20 years ago, the percentage of people in the country who accept the idea of evolution has declined from 45 in 1985 to 40 in 2005 (Science, vol 313, p 765). That’s despite a series of widely publicised advances in genetics, including genetic sequencing, which shows strong overlap of the human genome with those of chimpanzees and mice. “We don’t seem to be going in the right direction,” Miller says.

There is some cause for hope. Team member Eugenie Scott of the National Center for Science Education in Oakland, California, finds solace in the finding that the percentage of adults overtly rejecting evolution has dropped from 48 to 39 in the same time. Meanwhile the fraction of Americans unsure about evolution has soared, from 7 per cent in 1985 to 21 per cent last year. “That is a group of people that can be reached,” says Scott.

The main opposition to evolution comes from fundamentalist Christians, who are much more abundant in the US than in Europe. While Catholics, European Protestants and so-called mainstream US Protestants consider the biblical account of creation as a metaphor, fundamentalists take the Bible literally, leading them to believe that the Earth and humans were created only 6000 years ago.

Ironically, the separation of church and state laid down in the US constitution contributes to the tension. In Catholic schools, both evolution and the strict biblical version of human beginnings can be taught. A court ban on teaching creationism in public schools, however, means pupils can only be taught evolution, which angers fundamentalists, and triggers local battles over evolution.

These battles can take place because the US lacks a national curriculum of the sort common in European countries. However, the Bush administration’s No Child Left Behind act is instituting standards for science teaching, and the battles of what they should be has now spread to the state level.

Miller thinks more genetics should be on the syllabus to reinforce the idea of evolution. American adults may be harder to reach: nearly two-thirds don’t agree that more than half of human genes are common to chimpanzees. How would these people respond when told that humans and chimps share 99 per cent of their genes? 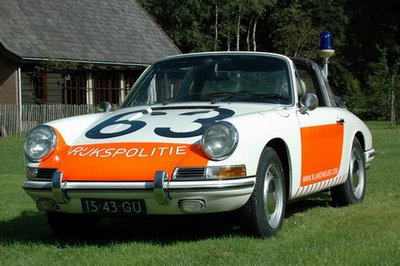 on the streets of whitehall 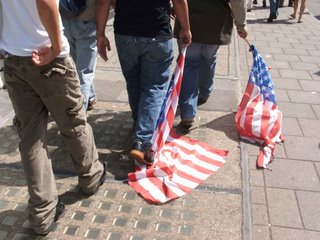 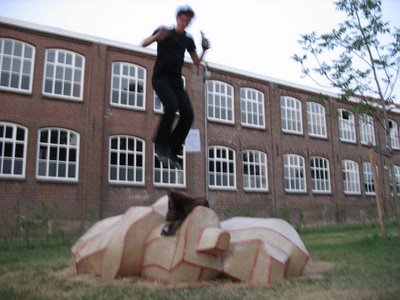